With the release of Firefox 57 back in mid-November, thousands of Vimperator users—or, rather, ex-users—learned that their add-on won’t be updated anymore. Luckily, a number of viable alternatives were already in development, so one could just wait out and see which one will get the most traction, right?

Well, 1.5 months later there is still no clear winner. Vimperator’s README lists all candidates, but doesn’t provide any guidance in choosing between them. So I used each one for almost a week, and wrote this post to share my impressions.

First off, let me list some limitations that are common to all add-ons reviewed here. They:

With that out of the way, let’s dive into distinctive features. If you’re in a hurry, you might want to skip right to conclusions.

With 8K GitHub stars and almost 11K installations, it’s easily the most popular add-on reviewed here. This is probably due to the fact that Vimium began as a Chrome extension and has been in development since September 2009, whereas other add-ons were started in 2017.

Default Vimium keybinds are mostly equivalent to Vimperator’s, save for o / O / t / T which were replaced with o / ge / O / gE. I didn’t spot any more differences, but you better press ? and check for yourself.

Similarity to Vimperator ends with keybinds, though. Instead of a Vim-style command line, Vimium adopts that monstrosity called an omnibar. I could never get used to it in Chromium, and now it plagues my favourite browser as well: 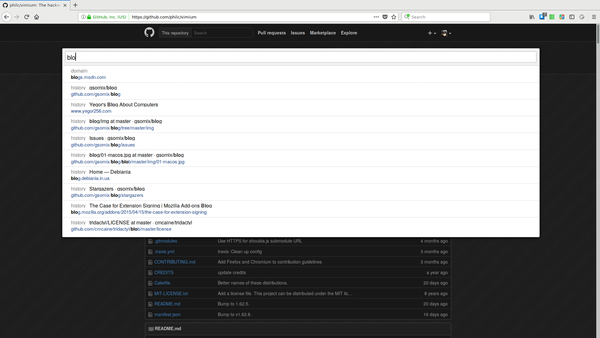 Vimium is configured via a config with syntax similar to that of vimperatorrc. You can back it up and restore it later.

Overall, I think anyone but Vimperator power users will find themselves right at home with Vimium. It seems to provide pretty much every convenience possible with new APIs.

The add-on can be found on addons.mozilla.org, and its source code is hosted on GitHub.

What makes Saka Key stand out is its settings dialog: 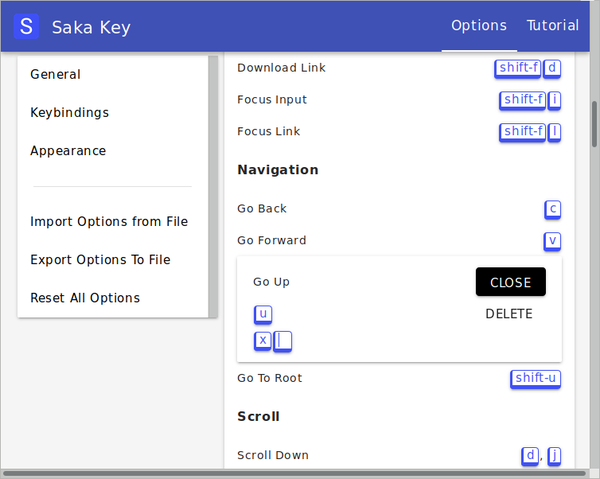 Changing a keybind is as easy as finding it in a list and typing in a new one. There are a few pre-defined profiles: “default”, “power”, “one-handed”, and “vimium”; the latter being, of course, the most convenient for us Vimperator refugees.

Saka Key also allows you to tweak the appearance of its URL hints, using either a user-friendly dialog, or no-less-user-friendly CSS. This is much harder to do in other add-ons.

Saka Key omits a big chunk of Vim commands that could be brought over to Firefox, e.g. counts, the command line, macros, autocommands, even dot command that repeats your last action. But things that it does implement, it strives to implement well. For example, when you press gi, other add-ons put the cursor into the first input field they find; Saka Key hints all fields and lets the user choose:

Another example: instead of reaching for omnibar, Saka Key completely defers to well-known Firefox controls. It has a key to create a new (empty) tab, but if you want to go somewhere, why, just put that URL where URLs always went—in the address bar. While this slightly increases the keystroke count, I still find it a very graceful solution.

It feels like Saka Key wants to be only as intrusive as user wants it to, which is a good thing for people who don’t necessarily want complete Vim power at their fingertips. You can even recommend this add-on to your non-vimmer friends who want to drive their browser with a keyboard but don’t want to deal with this whole Vim paradigm.

Unlike other add-ons, this one has a homepage. You can also find it on addons.mozilla.org and on GitHub.

Vim Vixen is a relative newcomer because it was started in August 2017, but it’s already more popular than Saka Key (which started in February 2017). Despite that, I still found it rough around the edges, and I struggle to provide a coherent, structured review.

Unlike Vimium and Saka Key, Vim Vixen sports a real command line, but only four commands are available: :open, :tabopen, :winopen, and :buffer. Keybinds don’t support counts. Configuration can be tweaked either through a crude UI in preferences, or through a blob of JSON (and you might lose some settings if you convert from JSON back to GUI).

It seems to “overlay” its keybinds on top of what a page already offers, whereas other add-ons provide an “ignore mode” instead. Vim Vixen’s approach might be okay if you know for sure what keys the page handles, but I found this behaviour to be an annoyance.

You can find Vim Vixen on addons.mozilla.org, and the source code is on GitHub.

First thing you’ll notice about Tridactyl is the page it displays in new tabs. It both teaches you a bit about add-on’s functionality, and saves you from a context switch (you won’t have to remember native Firefox shortcuts).

Tridactyl implements a command line, but doesn’t have command autocompletion there yet. The add-on is configured just like Vim and Vimperator—with :set command. Of course, there’s no autocompletion for settings either. You’ll be reading the help file a lot, I fear. And there is no way to find out the current value of a setting. On the upside, settings are persisted on every change, so you can just tweak it as you go with very tight feedback loop.

Default keybinds are mostly equivalent to Vimperator, but gt sticks out like a sore thumb: it mimics Vim, not Vimperator, i.e. its count argument is treated as tab index, not as a “step size”. Luckily that’s easy to fix with :bind gt tabnext. I should also note that Tridactyl is the only add-on that implements dot command.

A couple of times I managed to somehow confuse Trydactyl so much that it stopped accepting my keystrokes. I had to click somewhere to return it to its senses.

Out of all the add-ons reviewed here, Tridactyl resembles Vimperator the most. It still has a lot of features to implement, and a lot of battles to fight to get APIs for those features; but the groundwork is clearly there. I sincerely hope it will become the replacement for Vimperator and Pentadactyl that it strives to be.

You can find Tridactyl on addons.mozilla.org (please give beta releases a shot!) and on GitHub.

Saka Key is the most user-friendly and user-centric of all add-ons reviewed here. It can be recommended not just to vimmers, but also to anyone who’s looking to drive their browser with a keyboard.

Vimium-FF is a solid add-on that’s been around for almost a decade. It seem to be at peace with limitations of WebExtensions API, embracing the omnibar and letting the command line rest. I think it’s the most full-featured and polished add-on of all reviewed here.

Vim Vixen is a mixed bag. Configuration isn’t all that friendly, but it’s usable. Command line is implemented, but with only four commands. Keybinds cover all the usual stuff, but counts aren’t supported. Despite all that, it’s more popular than Saka Key and Tridactyl. I probably missed some important point while using it.

Tridactyl is the hope. In terms of features, it’s almost on par with Vimium, but what really matters is where it’s going: Tridactyl aims to be a replacement of Vimperator and Pentadactyl. Where it’s limited by the APIs, its developers file bugs with Mozilla instead of embracing or working around the problem. So if you used to be a Vimperator power user, and especially if you’re a programmer—pick this one, it’s where all the interesting stuff is going to happen.